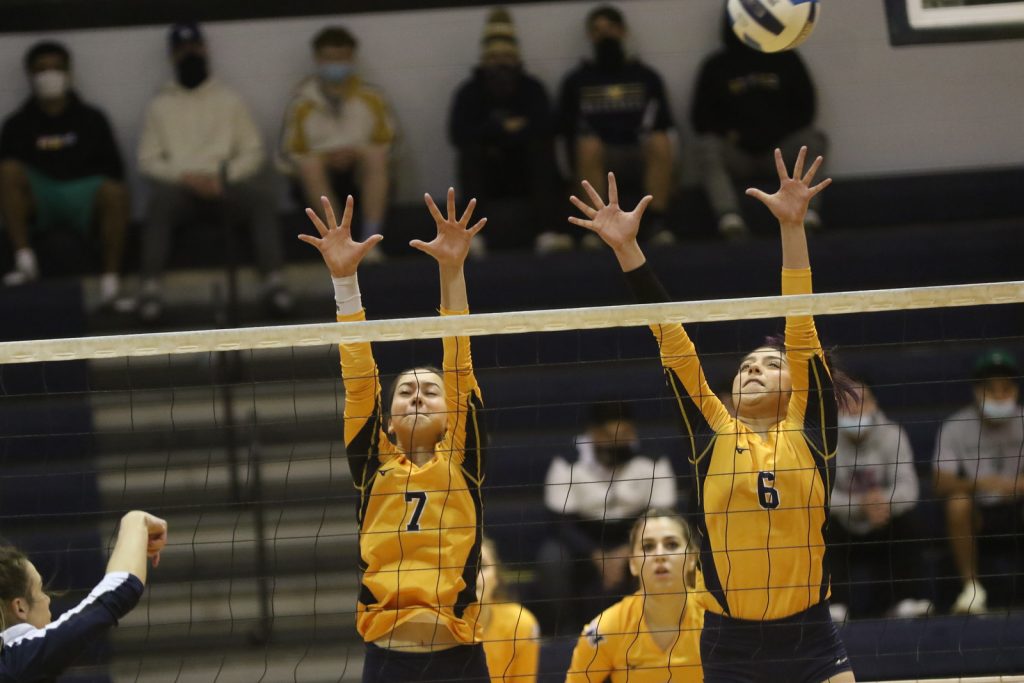 Cordero’s 19 kills moved the sophomore from California up to 14th on the career kill list with 876 kills and 124 kills from being only the 12th volleyball player to notch 1,000 career kills.

WNCC will be back in action Tuesday when they host Northeastern Junior College in the final home match of the season in a key South Sub-Region match-up that will decide the No. 1 seed for the Region IX tournament that starts March 31 in Casper, Wyoming. Tuesday night will also be sophomore recognition night.

Anuhea Kaohi, who finished with nine kills along with Olivia Schaub, said the team played really well to get the win, especially the way they started the match.

“I thought we had a really good game,” Kaohi said. “I thought we kept a good steady energy which was something we made a point to work on. It was a good day.”

A big reason for the sweep was the team’s start in the first set as Andrea Tsvetanova served eight straight points for an 8-0 lead. Tsvetanova added four more points on her second turn of serving to push the lead to 21-8. WNCC won the first set 25-14.

Kaohi said starting strong is vital for this team.

“That [starting strong] was something that we made a point on focusing on in practice was starting out strong because at the beginning of the season we really struggled with that,” she said. “We knew the beginning of the game was really important to us. Once we were able to do that, it set the tone for the whole game and it was good.”

The first set was what set the tone of the match. The second and third sets, however, were much closer against an Otero team that featured a pair of players that were 6-foot-3 or taller.

The second set was back and forth with Otero grabbing a 6-5 lead on two Avery Bouldin points. WNCC came right back to go up 8-6 on two Macey Boggs points and led 11-7 after two Mariah Fukamoto points.

Otero came back to tie the second set at 15 and then led 17-16 on a Getsemani Carrasco point. Schaub stopped the rally with a kill and then Fukamoto served five straight points for a 22-17 lead. WNCC won the second set 25-19 on a Cordero kill.

The third set started that same way as the second set as Otero led 6-5 until WNCC took a 10-8 lead on a Boggs’ point. WNCC led 13-9 after a Cordero kill and then the sophomore outside hitter went back to serve to points. Otero came back to grab a 12-11 lead on a Carrasco point.

Schaub got two kills for a 16-13 lead and then Anabelle Gillen ran off five points for a 21-13 lead. WNCC captured the third set 25-17 after a Cordero kill and then Cordero served the final point.

WNCC had balanced performances from everyone that played. Cordero led the way with 19 kills, nine digs, four points and an ace. Schaub tallied nine kills while Kaohi had nine kills and six digs.

Also for the Cougars, Angel Nahinu finished with three kills and Fukamoto had 12 digs, eight points, and two set assists.

Next Tuesday will be a special night for the seven sophomores – Cordero, Schaub, Gillen, Hernandez, Kaohi, Tsvetanova, and Laura Ferrao, who will be playing their final game at Cougar Palace. The sophomores, because of COVID eligibility rules put into play, could come back as no one loses a year of eligibility, but a lot of sophomores have signed or have offers to continue at a four-year school.

Kaohi said Tuesday is going to be a special night for the seven.