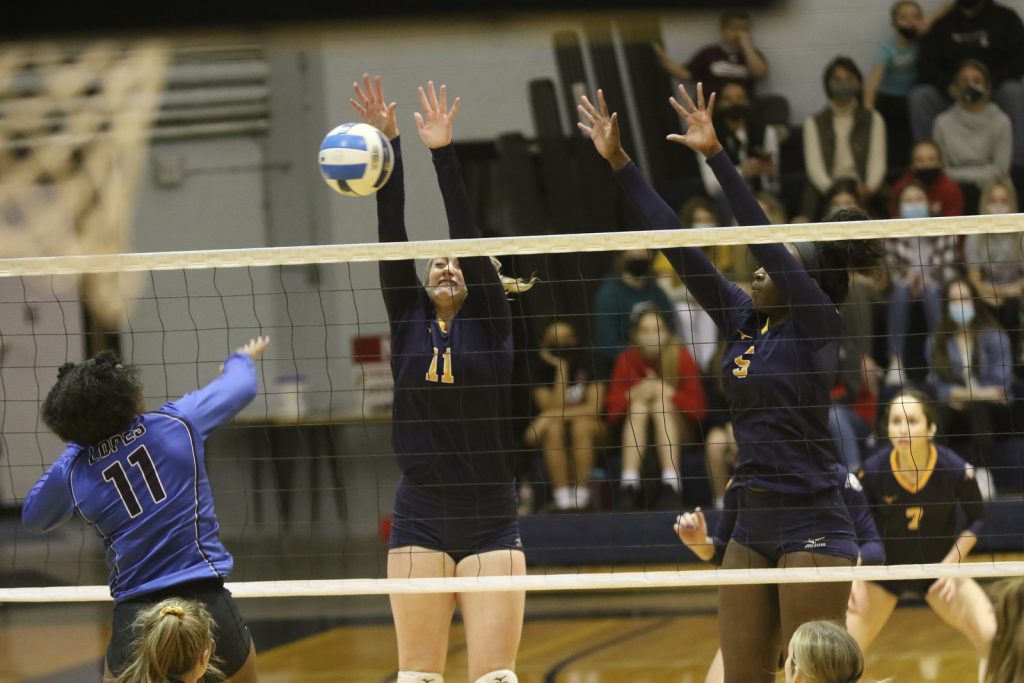 STERLING, Colo. – In a top 15 showdown, the No. 11 Western Nebraska Community College volleyball team captured their 16th win of the season with a four-set, South Sub-region win over No. 14 Northeastern Junior College Saturday evening in Sterling, Colorado.

Andrea Tsvetanova, who had two key setter kills in the second set, said this was a big win for the team.

“I’m really proud with everyone on the team,” the sophomore setter said. “We knew that it wouldn’t be an easy game and we had to push hard from the beginning if we wanted to win this game. In my opinion, the team played really well in the first two sets and we were dominating all the time. We managed to do this by being a team and playing for each other and the coaches.”

The way the team played in the first two sets was vital, as the Cougars’ offense kept the NJC offense and defense out of system. Tsvetanova said the energy they brought was key to the quick start.

“The key for the win today was the energy and the motivation we had for sure because we really wanted to prove that we can beat everyone,” she said. “Something really important that we did today was that we played as a team and we fought until the end.”
NJC is not an easy place to play because of the environment of crowd noise. Even with a limited fanbase because of the COVID precaution, it was loud.

“Something that stands out for the team is the energy we had during the game because we managed to deal with the crowd and stay focused even through all the comments we had and the external noise as well which was very important for our win today,” Tsvetanova said. “We still need to work a lot and improve every day as a team team.”

WNCC had plenty of offensive power in the win with some nice defense against last year’s Region IX champions.

WNCC committed just 20 hitting errors in the four sets and most of them came in the third set in which they lost.

The first set saw the two ranked teams tied five times, but WNCC never trailed in the match. The two teams were knotted at 10-10 when Tsvetanova had two service points. NJC cut the deficit to one, 13-12, but a Cordero kill and three Alex Hernandez points put WNCC up 17-12.

WNCC trailed just once in set two at 1-0. Kaohi tied the game at one and then Hernandez had two points for a 3-1 lead. WNCC doubled up NJC at 10-5 with two Gillen points and led 18-12 on a Hernandez kill. Tsvetanova pushed the Cougars lead to 21-13. Angel Nahinu got a kill to make it 24-15 and then Boggs served the final point along with a hammering kill by Schaub to give the Cougars the 2-0 set lead.

The fourth set started out back and forth early. WNCC led 6-3 after two Boggs points but NJC came back to grab a 7-6 lead. Fukamoto put WNCC back on top with two points at 9-7 and WNCC widened the lead to 15-11 with a Laura Ferrao kill. WNCC led 18-13 before the Plainswomen went on a 18-17 service run.

Hernandez had a near double-double, finishing with 15 digs, eight kills, seven points, and four aces. Gillen had six digs and three points while Boggs had seven points and three aces.

Also for the Cougars, Angel Nahinu had two kills and a solo block; Laura Ferrao had two kills; and Fukamoto had six digs and six points.

WNCC will be back in action this weekend when they hit the road for two South Sub-region contests when they face Otero Junior College on Friday and then Trinidad State Junior College Saturday afternoon.