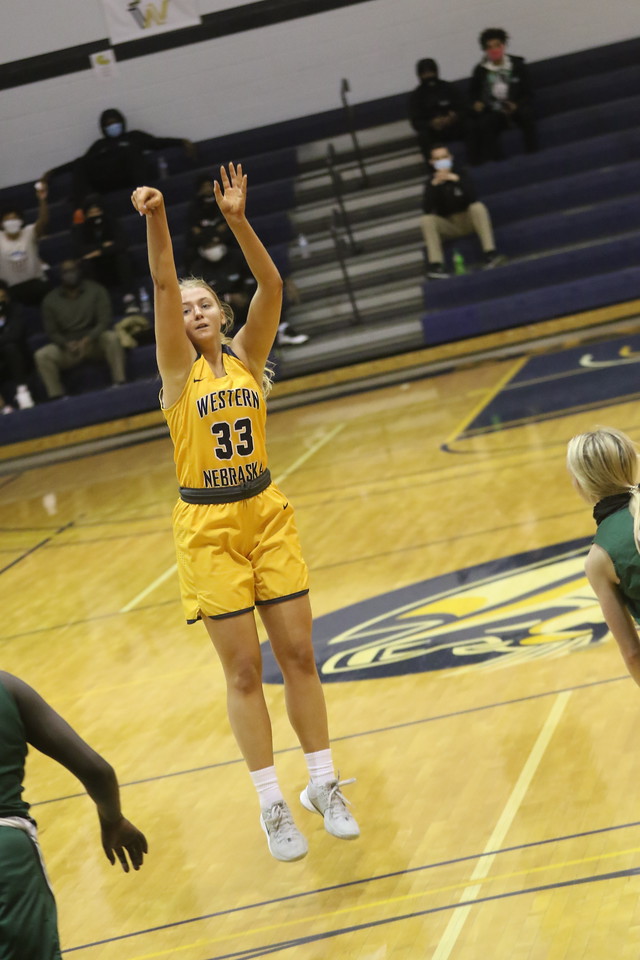 The Western Nebraska Community College women’s basketball team put three players in double figures and captured an 80-35 win over Central Community College-Columbus in the final day of the WNCC Classic at Cougar Palace.

Maddy Campbell led the Cougars in the win with 15 points all on five 3-pointers in the first half. Campbell also pulled down six rebounds.

Also hitting the double-digit scoring column were Lidsey Mahoukou with 11 points and Alejah Douglas with nine.

Madison Blaney, who finished with seven points, said it was a good game for everyone to get quality minutes.

“This game was a good game for everyone to get on the court, get their chance, and play their role for the team,” she said. “Everyone stepped up and contributed to our success.”

It was definitely a team win as 12 players scored for the Cougars. Blaney said the biggest thing that helped the team win was defense. WNCC held the Raiders to single digit scoring in three of the four quarters.

“The big keys that helped us get the win today was our defensive stops and transition points,” she said. “Shots weren’t falling so we had to run the court and get lay-ups.”

WNCC trailed once in the contest at 4-2 and then went in front 9-4. Central-Columbus cut the lead to two points, 11-9, on a Allanah Beller trey, but Blaney had an old-fashioned 3-pont play to help the Cougars led 16-9. WNCC led 21-10 after the first quarte after Mahoukou had five points.

WNCC opened the second quarter on a 6-0 run to lead 27-10 and then saw Campbell hit four straight 3-pointers to lead 43-17 at halftime.

WNCC added to the lead in the third, outscoring Central-Columbus 19-9 for a 62-26 lead after three periods. WNCC outscored the Raiders 18-9 in the fourth quarter for the 8-0-35 final score.

WNCC shot 37 percent from the field and were just 22 percent from beyond the arc. The Cougars had eight treys, five of which came from Campbell. WNCC was 12 of 15 from the free throw line.

Rebounding, however, was close as WNCC out-rebounded the Raiders 45-44. Campbell and Ky Buell led the team with six boards, whole Douglas and Mahoukou each had five.

WNCC will be back in action Monday when they host Laramie County Community College at 5:30 p.m. followed by the men’s contest.

Blaney said they will just focus on what they do best in the contest against LCCC, a team they defeated 87-61 on Feb. 2 in Cheyenne.

“On Monday, our focus points will be playing our own game at a fast pace,” the Cheyenne, Wyoming, product said. “Working hard on defense and good communication through are whole game.”

Blaney said the team might be 8-2 on the season, but they still need to get better.

“As a team we are not where we want to be,” she said, “but every game we grow more and more.”

The first women’s game on Saturday was a barnburner between Northwest College and Lamar Community College. Northwest held a 29-26 halftime lead and then outscored Lamar 18-7 in the third to lead 47-33 after three periods.

The fourth quarter was a difference story as Lamar outscored Northwest 19-7. Lamar cut the Northwest lead to one at 51-50 with 2:37 to play. Northwest came back and hit key free throws to take a 54-50 lead. Lamar sliced the lead to two on a Jada Dupree bucket. The Lamar defense then played tough defense after getting a five-second call to get the ball back, but Northwest got a steal to steal the game with two seconds to play.