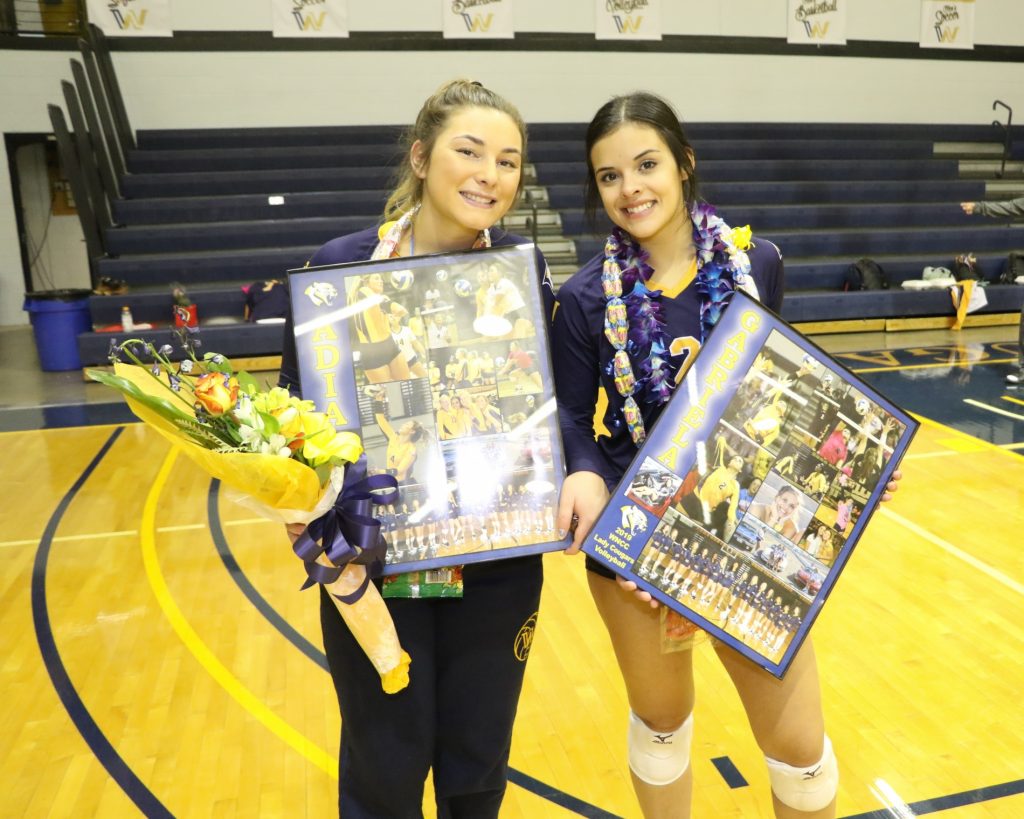 Gabriela Canavati didn’t realize when she attended Western Nebraska Community College two years ago that she would finish her education at the college with much more than athletic honors.

What Canavati ended with Cougar career with was many friendships and honors that go far and above the sports world.

The WNCC all-campus award winners were announced last week without a ceremony like in past years and for Canavati, she was the big winner capturing two all-college awards and two athletic awards.

“Adia and I were definitely busy,” Canavati of Larado, Texas, said. “We were roommates and we were in a lot of the same organizations so we both had a lot in our hands. But I think just being involved in as much as we were brought us that much closer and we fed off of each other’s energy! It was a great experience.”

Sherbeyn, who was give the Student Body Leadership Award along with Canavati, said the two were busy, but it helped them grow together.

“Gaby and I always seemed to be busy during the school year,” the Torrington, Wyoming, volleyball player said. “We would either be studying together, at a meeting together, in class together, working out together, or at practice together. However, we helped each other grow to be the best students, people, and players we could be. I’m very grateful to have gotten through this year with the help of her.”

Sherbeyn was just as busy. Besides being involved with the volleyball, Sherbeyn was a student ambassador, involved in student government as well as Phi Theta Kappa.

Canavati’s year didn’t have any down time either that is for sure. And what Canavati did off the court helped her earn the prestigious all-campus Cougar Award, which is awarded to a Cougar athlete that excels on and off the playing field. Last year the Cougar Award was awarded to softball player Michaela Kelly and two years ago the honor went to baseball player Claude Bova.

“A lot of my free time was dedicated to extracurricular activities in order to pass the time,” Canavati said. “Not only was I on the volleyball team but I was the parliamentarian of Student Government, I was a Student Ambassador, and I am a member of the National Society of Leadership and Success. Of course, while focusing on this, I also had to deal with my academics and I’m glad I had all the resources to be successful and that I can give credit to all my success.”

The two volleyball teammates and roommates also were picked as Student Body Leaders.

Sherbeyn said being a student body leader was special and her and Gaby made a good team.

“Being a part of the student body leaders was pretty important to me. It is all about being a voice for all of our students at WNCC and it feels pretty good to be a part of that,” Sherbeyn said. “Me and Gaby make a pretty good team and I enjoyed the time I had with her during the meetings and retreats. I also enjoyed being around all of the other members as well!”

Canavati earned two more honors as well, both were athletic honors that were new to the WNCC Awards Ceremony. Canavati was named as an Unsung Hero that is awarded to athletes from the college’s seven sports.

Canavati said that hone was special.

“This is a new award for me, but it just means that all of the hard work I put in to get to where I am now, definitely went unnoticed,” she said. “I am extremely grateful for what I have done and experienced during my time at WNCC.”

Canavati earned another new award, earning MVP honors on the volleyball team along with her teammates freshman Karen Cordero and sophomore Ana Costas. The Unsung Hero and MVP awards had nominees submitted by college faculty and staff and voted on by the awards committee.

“Like I said before, I worked extremely hard to get where I am now at this point, and I couldn’t be more proud of myself,” she said. “This is a great honor because everyone of the girls I play with is phenomenal and to be selected really meant that much more to me.”

Costas had a big year as the libero on the team. Costas finished with 547 digs and had 29 ace serves and 101 set assists.

Costas will be heading to Tarleton State University to play next year. Canavati signed to play at Cameron University in Oklahoma. Sherbeyn said that she is looking to continue her volleyball at another school as well.

For all the volleyball players, though, they didn’t get the proper farewell as their spring season was cut short in March because of the corona virus with spring matches canceled. The sophomores also missed out playing one more time with their teammates.

“I think since it all happened extremely fast and unexpected, we were all kind of confused,” Canavati said about the sudden change in learning and cancelation of sports. “It’s like I knew the goodbyes were coming but I wasn’t prepared for how soon they were gonna approach. It was hard to acclimate to these conditions but with the help of professors and faculty, they made it that much easier. It will be very hard, but it is a part of life and it was bound to happen, but never did I imagine so soon. I will miss everyone so dearly and will most certainly keep in touch.”

Sherbeyn felt the same way as she didn’t give the proper goodbye to her friends, coaches, and teachers as in past years.

“Something that I really struggled with was not being able to say goodbye to my friends, teammates, coaches, and teachers the proper way. I hope to someday get this time back with some of them,” she said. “There is social media and FaceTime that makes it a little bit easier but it’s really not the same. On the school end of it I feel like it has been a little easier just because I actually have time to get all my work done. It is definitely not ideal at all, but my teachers really worked very well for us students to make the transition more manageable!”

Both Sherbeyn and Canavati both will enjoy every bit of their sophomore year when they look back on it in future years.

“My sophomore year was definitely memorable,” Sherbeyn said. “It’s always tough thinking it was cut short, but I’ll always try to think about the good memories that I’ve had with my friends this year and all the good that has come out of it.”

“The past year was definitely something to remember. It came and gone like no other,” she said. “Volleyball has opened many doors for me, and I will always be grateful. I wish everyone the best and for nothing but just success in their lives and future endeavors.”