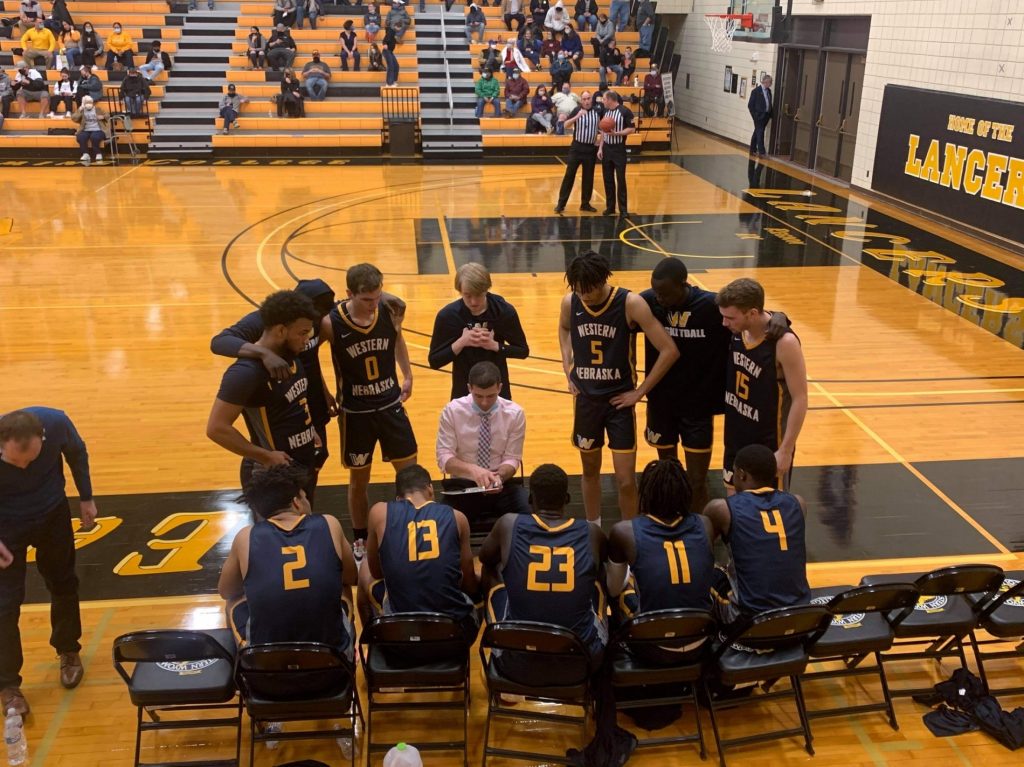 DeOllos said he couldn’t be prouder of his team for the fight they gave to make the late run to get the win.

“Couldn’t be any more proud of this team,” the Scottsbluff High product said. “Being down 11 with three minutes left is something you;ll see many teams back down from. But our team is not scared of the big moments. We keep fighting and we made enough of a push to win the game. Without the extra effort at the end, we would be feeling so much different.”

WNCC head coach Billy Engel was proud of his team’s effort to not give up and keep fighting down to the last second to get the win.

“I thought once again our guys competed their tails off,” he said. “We made some big strides in practice defensively this week. We knew we had to change some things with how we’ve been defending lately and our guys did an outstanding job of translating that into the game tonight.”

The defensive intensity came really big with under 30 seconds to play in forcing a big turnover to get the ball back and then applying pressure to get the ball at the end of the game without the Lancers getting a last-second shot up.

“I’ve been impressed with this groups ability to never count themselves out,” Engel said. “Once again we could have thrown in the towel in the second half, but we just refused to. We stepped up, forced some turnovers, and just found a way to pull out a W.”

The men’s game was also very interesting as the Cougar men made adjustments late in the second half, outscoring the Lancers 21-5 in the last five minutes. Scottsbluff’s DeOllos, a freshman, hit 4 of 6 free throws with .7 seconds left to give the Cougars the 78-75 win.

The men’s game looked as if the Lancers were going to steal the win as the Cougar men held a slim led at halftime 31-30, but trailed by 13 with five minutes to play at 70-57.

That was when things got interesting as WNCC went on a 8-0 run to slice the lead to 70-65. EWC hit two free throws, and went up by seven on two more free throws with just under two minutes to play at 74-67.

WNCC got a big 3-pointer by Chase Thompson and a bucket by Taylor Johnson to cut the lead to 74-72. The Lancers hit one of two free throws with 41.6 seconds to play. WNCC came back and DeOllos drove the lane and was fouled. The Scottsbluff High product hit both shots with 34.3 seconds to play.

WNCC’s defense picked up as the Cougars got an offensive charge, but they couldn’t convert on a shot and EWC got the rebound and was fouled with 10.5 seconds to play. The Lancers missed both charity tosses and WNCC had a shot missed but on the rebound, EWC fouled the Cougars and then extra fouls were called.

DeOllos stepped to the line for six free throws and converted on four of them to put the Cougars up 78-75 with .07 seconds to play. DeOllos missed the last charity toss and as soon as EWC got the rebound, the Lancers called time out for one last desperation chance. The Lancers heaved the ball to the top of the key but WNCC came down with it and the win.

WNCC was led in scoring by Thompson with 23 points with three 3-pointers. Also hitting double digits for the Cougars was Taylor Johnson with 16 points.

WNCC shot 50 percent from the field and made nine 3-pointers. The Lancers shot 47 percent and made 11 3-pointers.

WNCC will be back in action this weekend when they host a 3-day WNCC classic. The Cougars won’t play Thursday, but Northwest College and Central Community College-Columbus men and women will play Thursday. Then, WNCC and Lamar will join the classic on Friday and Saturday. The Cougars face Northwest College on Friday at75:30 p.m. and then Central-Columbus on Saturday at 4 p.m.