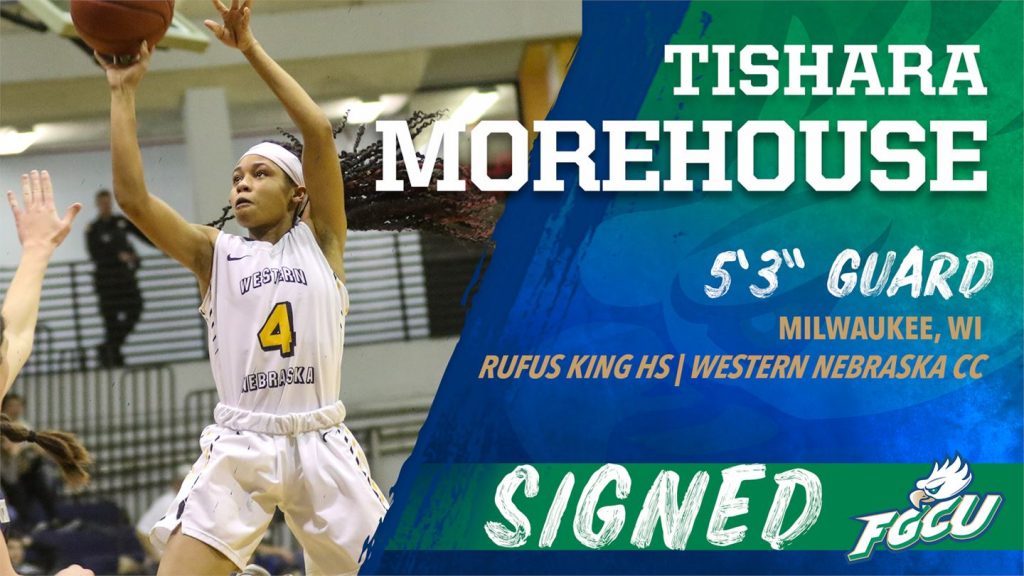 Tishara “TK” Morehouse put together two solid seasons at Western Nebraska Community College and her reward came true this week of playing Division I basketball when she signed with Florida Gulf Coast University, a program that has made the post-season every year since 2009.

Morehouse, the 5-foot-3 speedy and feisty guard, said everything about FGCU stood out.

“They are a great team and their togetherness is really good,” she said. “They are ranked number one in their region. Their coach is perfect and fits everything I want to do. He is fast-paced and that is what I really like. He has a lot of connects with pros. I don’t have to talk about the living area; it is a beautiful place and it is on the beach. It is a win-win. The coaching is good. The team togetherness is good. The education is good.”

FGCU head coach Karl Smesko is excited to get someone of Morehouse’s talents in his program.

“”TK is explosive and dynamic,” Smesko said. “She had an exceptional season at Western Nebraska and has proven she can hit the three and attack the basket. She scores a lot, but also shares the play. She’s a playmaker.”

Morehouse becomes the third WNCC women’s basketball player to attend Florida Gulf Coast. Emma Beddome played one year for the Eagles in 2008-09 while Chelsea Lyles played three years of sports for the Eagles from 2008-2010. Lyles is in her 10th year as the associate head coach for FGCU.

“That is cool that the school I came from, she [Coach Lyles] had the same path,” Morehouse said. “She has a good intake and understanding of a JUCO player.”

What makes Morehouse appreciative of the Division I playing opportunity is the fact that she had a lot of people that didn’t think a 5-foot-3 player could play at that level. Through hard work and persistence, Morehouse worked hard to get to the Division I level.

“When they [people] say to work hard, you have to work hard and really do it,” Morehouse said. “When you are consistent and persistent it all comes together. People tell me you really got better.”

Her hard work and dedication paid off.

“I am excited to play DI, of course,” she said. “That has been my goal and something I strived for. I can say I done it now that I am a DI player.”

The Eagles will look to Morehouse to provide a scoring punch next year after the Milwaukee, Wisconsin, native averaged 21 points, 5.4 rebounds and 4.1 assists per game last season while earning NJCAA First Team All-American honors. Morehouse was also named to the All-Region IX team, the Region All-Tournament team, and was the honorary captain of the Omaha World Herald JUCO All-Nebraska team.

Morehouse helped the Cougars to a 28-2 record this season, a No. 2 ranking in the NJCAA polls, and a 7th seed at the NJCAA national tournament in March.

This past season, Morehouse reached double-figures in all but one game and registered 16 games with at least 20 points, including a trio of 30-point efforts — a career-high 38 points vs Utah State Eastern on Dec. 6, 34 points against Casper College on Nov. 19, and 31 against Sheridan College on Nov. 5.

The talented point guard finished her career with the second most points in school history (1,118), pulled down 267 rebounds, dished off 244 assists, and had 155 steals. She connected on 136 3-point shots.

Morehouse said her time at WNCC was a success.

“My time at WNCC was perfect,” she said. “My freshman year I wanted to go in and work on my studies and do everything I needed to upgrade myself and my game. I worked so hard and I told myself that I could do it. I did it. It was a great season at WNCC.”

Morehouse said there are a lot of people to thank and it all begins with her family and all the coaches she had.

“I first want to thank my mom, my sister, my dad, my whole family because they supported me in my life even when I was down. They helped me get back up,” she said. “I want to thank my coaches I had through my life helping me in practices. I want to thank Coach [Chad] Gibney for letting me spread my wings at Western Nebraska and show what I can do as a 5-foot-3 point guard.”