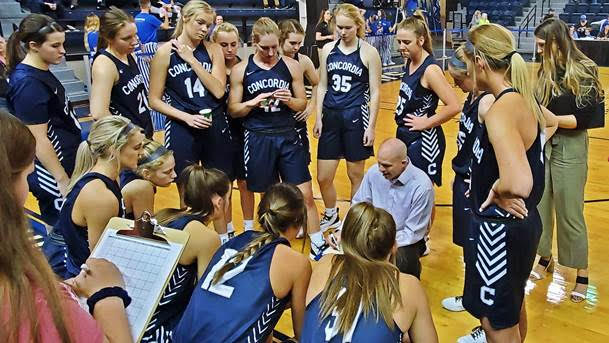 SEWARD, Neb. – The lineup will have a different look to it in 2020-21 for the powerhouse Concordia University women’s basketball program, which today (April 22) announced its schedule for next winter. The Bulldogs will carry an active 18-game win streak into play when the 2020-21 slate officially tips off on Nov. 6 at the Cattle Classic. The new schedule includes the standard 22 GPAC and eight nonconference regular-season games.

The program has enjoyed plenty of stability under head coach Drew Olson, who began his tenure with the 2006-07 season. After winning the NAIA Division II national championship in 2019, Concordia concluded 2020 ranked No. 1 nationally when its season was abruptly cut short. This will be a new era with the NAIA transitioning to only one division of basketball. Things will also be different because the Bulldogs graduate a loaded senior class that features All-Americans Grace Barry and Philly Lammers.

Prior to the official opening of the 2020-21 season, Concordia will be in Denver, Colo., to take on NCAA Division II Colorado School of Mines in an exhibition game on Oct. 24. Then at the 21st annual Cattle Classic (Nov. 6-7), the Bulldogs will host the University of Rochester (Mich.) and Carroll College (Mont.). A major highlight of the nonconference slate will be the trip to Honolulu, Hawaii, for games against Campbell University (Ky.) and Ottawa University (Ariz.), Dec. 18-19. The Bulldogs will play three foes that were ranked nationally at the end of 2019-20 in the NAIA Division I poll: No. 2 Wayland Baptist University (Texas), No. 4 Campbellsville and No. 17 Carroll.

The Concordia Invitational Tournament will make its way back to Seward for the 70th annual event, set to unfold Jan. 29-30. The Bulldogs have dominated CIT having won seven titles in a row and 30 in the history of the event. Barry earned CIT MVP honors in 2020. This coming CIT will put CUNE up against Concordia-Chicago on day one. The last time the Bulldogs hosted (2017), Quinn Wragge collected MVP accolades.

Conference play is set to begin in mid-November with Concordia hosting back-to-back games versus Midland (Nov. 10) and Northwestern (Nov. 14). The Bulldogs have swept GPAC regular-season and tournament titles each of the last four years. During that stretch, Concordia has gone a combined 78-6 in conference regular-season action. It is also 63-1 at home during that time.

Dates for the GPAC tournament are Feb. 24 for the quarterfinals, Feb. 27 for the semifinals and March 2 for the championship game. As part of the new 64-team bracket format, the NAIA National Championship opening round is set for March 12-13 with the proceeding rounds to take place March 18-23 at the Tyson Events Center in Sioux City, Iowa.