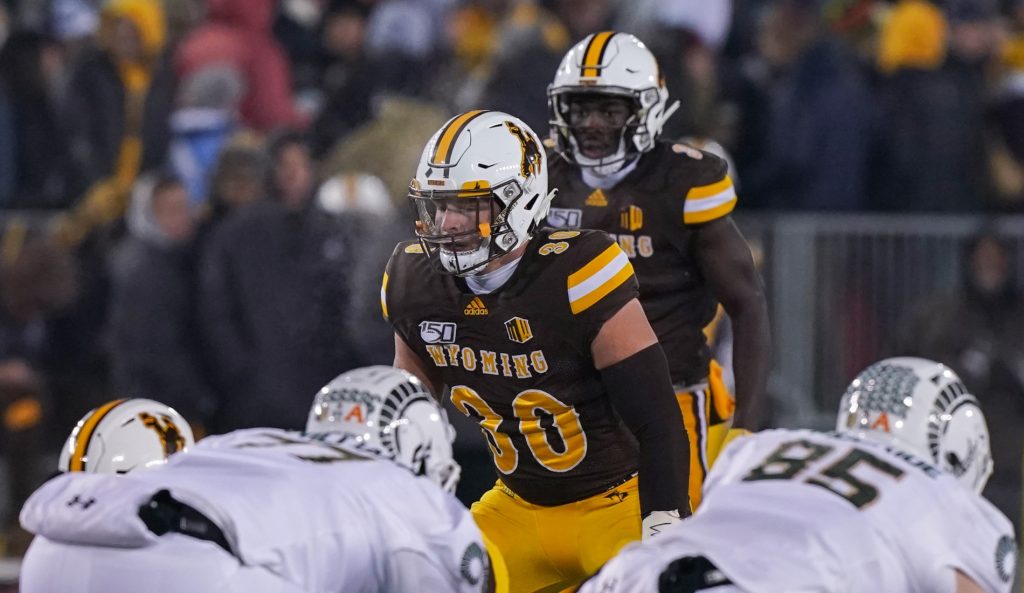 The previous highest selection in the NFL Draft of a Wyoming native, who also played for the Cowboys, was running back Jerry Hill back in 1961, when he was the seventh selection in the third round by the Baltimore Colts. Hill was a native of Lingle, Wyo.

He ended his career with 421 career tackles to rank No. 4 in both Wyoming school history and Mountain West Conference history. His consistency throughout his career was evidenced by the fact that he became only the fourth player in Wyoming history to record three 100-tackle seasons in a career (105 in 2019, 103 in 2018 and 119 in 2017).

He enjoyed his biggest games against Wyoming’s toughest opponents, recording 13 tackles in a 37-31 win over Missouri and making 10 tackles in a 17-20 overtime loss at Boise State. His stats for his senior season included: 105 total tackles, 62 solo tackles, four interceptions, 8.5 tackles for loss, seven pass breakups and a forced fumble.

Wilson was named a team captain for his third consecutive year and joined former teammate Marcus Epps as Wyoming’s only three-time team captains in the modern era of Cowboy Football. Wilson started every game of his college career — 52 consecutive starts from the first game of his redshirt freshman season to the final game of his senior season. He earned Academic All-Mountain West honors for the fourth consecutive year in 2019.

Former Wyoming linebacker Mark Nzeocha was selected in the seventh round of the 2015 NFL Draft by the Dallas Cowboys. He is currently with the San Francisco 49ers and played in last year’s Super Bowl. Cowboy running back Brian Hill (fifth round by the Cincinnati Bengals, now with the Atlanta Falcons) and offensive lineman Chase Roullier (sixth round by the Washington Redskins) were drafted in the 2017 NFL Draft. In the 2018 NFL Draft, Wyoming quarterback Josh Allen became the highest NFL Draft pick in school history when the Buffalo Bills selected him with the seventh overall pick in the first round. In 2019, Marcus Epps was selected by the Minnesota Vikings, he is currently with the Philadelphia Eagles.