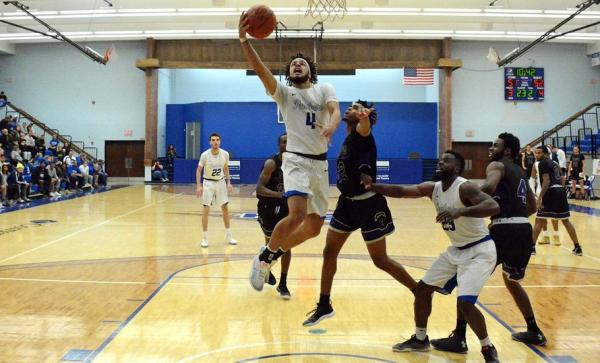 FREMONT – York College had a tough task on hand as they traveled to Midland on Tuesday night to face a tough GPAC school in nonconference action. The Panthers used a solid second-half shooting to surpass the Warriors 72-65. Eric Lenear (JR/Bellevue, Neb.) led the Panthers with a game-high 25 points. He was 8-for-12 from the field including 4-for-6 from downtown.

York jumped out quickly in the game as they led 11-0 with just three minutes gone. However, the Panthers were held scoreless over a four-minute stretch as the Warriors battled back within three at 18-15. The game went back-and-forth the final 14 minutes of the half as York never relinquished the lead. Kafani Williams (SR/Pembroke, N.H.) scored a basket with five seconds on the clock to give York the 31-28 advantage going into intermission.

The second half started similar to the first as the Panthers jumped back out to a 10-point lead at 40-30. But the tides started to change when the Panthers lead 44-35. Over the course of the next 3:36, the Warriors went on an 8-0 run and cut the deficit to one. On their next possession, they tied the game with a long three. Lance Ewell (SR/Brock, Texas) answered for the Panthers with back-to-back three’s of his own to put York back on top 52-46.

York found themselves with another double-digit lead with just over five minutes remaining in the game. Once again Midland cut it down to a two-possession game with over two minutes remaining. York looked to put the game away on a nice dunk by DeAnte Barnes (SR/Rockford, Ill.) put York up by nine with just over a minute to play. However, a technical foul was called on Barnes for hanging on the rim. A made free throw and three-pointer put the Warriors within five with 1:11 to play. Tyreece Berry (JR/Muskogee, Okla.) and Lenear held off the Warriors down the stretch as they combined for a perfect 6-for-6 from the charity stripe to end the game.

After shooting just 38% from the field in the first half the Panthers shot 52% in the second. Berry picked up a double-double with 14 points and 10 rebounds. Lance Ewell was the other Panthers to score in double figures with 13.

The Panthers have one more game before they begin KCAC play. York will host Doane University on Saturday night with a tipoff scheduled for 5:00 p.m. The two teams faced off just over two weeks ago as the Panthers prevailed in Crete with a final score of 70-65.