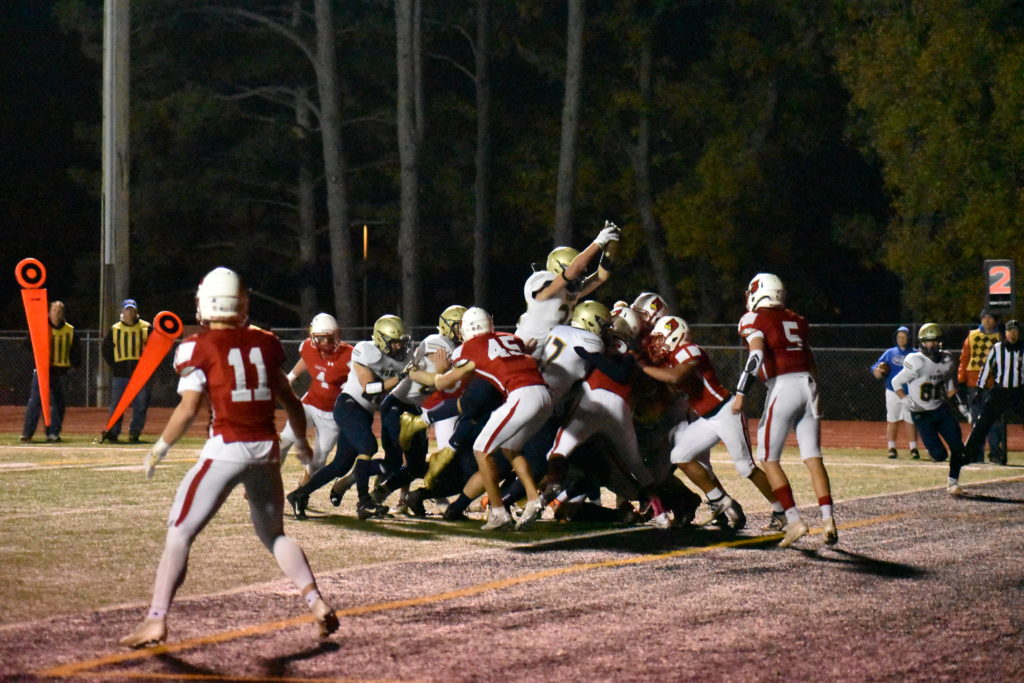 KTMX/KAWL Photo-Mackenzie Jones: York's Tom Erwin dives into the endzone for his second touchdown of the night in the Dukes final game of the season.

CRETE- York hit the road Friday night with the chance to sneak into the Class B playoffs, but the Dukes fell to the Crete Cardinals 34-27. Crete started the game fast with a four-yard touchdown run from quarterback Zach Fye to make it 6-0 early in the game. Later in the first quarter, Fye found Trevor Malone on a 10-yard touchdown pass pushing the lead to 13-7. The Dukes did score in the second quarter making it 13-7 on a 3-yard run by Tom Erwin.

Then the Crete Cardinals scored twice before the half, and at the intermission was 27-7.

In the third quarter, the Dukes came out and drove the field 73 yards and it was capped off by a two-yard touchdown run by Tom Erwin, making it 27-14. York then forced a punt and Jake Erwin scored from 26-yards out on the ground making it a one-score game 27-21.

Crete scored making it 34-21 late in the fourth quarter, but the Dukes gave a valiant effort as Jake Erwin scored as time expired with the final score reading 34-27

Crete finishes the year at 3-6. York ends the year at 2-7. Jake Erwin led the Dukes with 16 carries for 161 yards and two touchdowns.