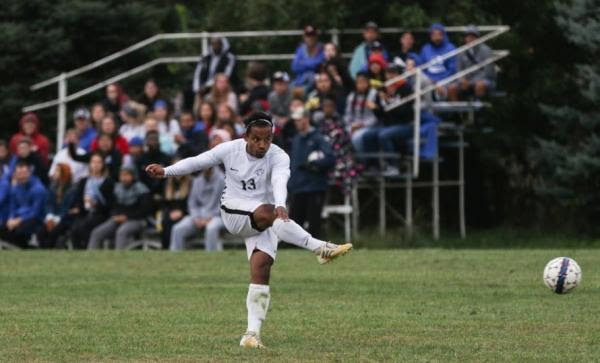 Alencar started off the scoring in the 19th minute when he scored off of a free kick from about 25 yards out. In the 31st minute of play, Gutierrez scored on somewhat of a gift from the Eagles as he intercepted a pass out of the back to put it away for the 2-0 lead.

As York seemed to be in control the Eagles got a little bit of momentum as they scored just 40 seconds before the break. That appeared to breathe life into the Eagles as they had been outshot 15-4 in the half.

Head Coach Alex Latorre told his guys to keep fighting and make the ball do the work. With the wet field conditions, they had to be ready at all times but to keep the ball moving, wear down the opponent and strike when the opportunity was there.

Jorge Alencar scored the final goal of the game after Davi Mendonca (SR/Fortaleza, Brazil) slid a pass to Alexandre Motta (SO/Sao Paulo, Brazil) who crossed the ball into Alencar. Alencar ripped a shot to the near post that had his shoe fly off in his follow-through.

The Eagles looked to get another opportunity to strike in the 70th minute, but a dangerous play resulted in the goal being wiped out and a lot of frustration on the part of the Eagles’ sideline.

The Panthers kept their composure and attacked while the iron was hot. Motta had a shot hit off of the post and Pedro Carvahlo had his shot go just over the crossbar.

Gabriel Cabral (SO/Campinas, Brazil) picked up the win with four saves on the day. York improves to 6-2 on the season and a perfect 2-0 in KCAC play. They will have a tough challenge on Saturday as they play on the road against the University of St. Mary in Leavenworth, Kansas.