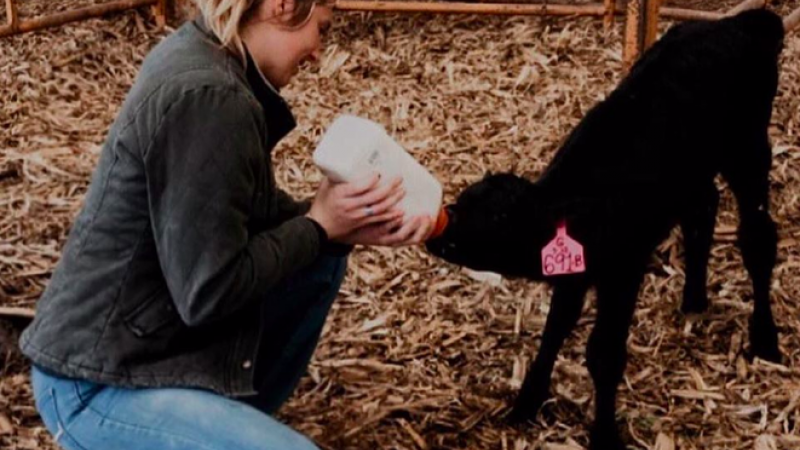 Anna Kobza, a senior animal science major in the College of Agricultural Sciences and Natural Resources, is set to graduate Saturday, May 9 during the University of Nebraska-Lincoln’s virtual ceremony.

Kobza, like other college seniors from UNL and all across the country, saw her final semester of college interrupted by COVID-19.

“You don’t feel as connected to your surroundings when there is not as many people buzzing by you,” Kobza said. “The best part of being on East Campus is we were coming out of winter, ready for springtime blooms, the sun and socializing with friends.”

Despite the unexpected end to her CASNR career, Kobza loved her time on East Campus and is grateful she chose UNL.

“That was one of the best decisions I’ve made even, though it was the most obvious decision I made when I was a senior in high school,” she said. “I ended up loving it a lot more than I thought I would.”

The David City native grew up helping on her grandparent’s operation nearby, caring for and showing calves at the local Butler County Fair. Her interest in livestock led her to take part in the Nebraska Beef Industry Scholars program.

Kobza’s grandfather started one of the first feed yards in Nebraska, and Kobza inherited his entrepreneurial spirit, which led her to join the Engler Agribusiness Entrepreneurship Program, one of her minors at the university.

In her four years on campus, Kobza became involved with many organizations, including Block and Bridle, Nebraska Farm Bureau, and Collegiate Cattlemen, among others. But her favorite parts of her UNL experience were her animal science classes.

“Honestly I love the fact that I got to go to class every day in a barn,” Kobza said. “I was in the animal science building most of the time and walking into it, it smelled like horses and cattle. Being exposed to that every day for most of my college career was something I love.”

Kobza was in the animal science building when she learned that classes would move online for the remainder of the semester.  As she left class, she realized shes was likely walking out of the building for the last time.

“I didn’t process the situation right away, but it hit me like a rock eventually,” she said. “I had to say goodbye to a bunch of people before I wanted to. That’s the part I hated the most,” Kobza said.

Kobza says she continues to stay in touch with college friends, many of whom come from family operations in agriculture. She recently traveled to a help a friend at Schuler Red Angus in the Panhandle with branding calves and other spring work on the ranch.

“It’s fun to go help them on their operations when you get the chance and keeping in touch over text, checking in on each other. I think that is really important,” Kobza said.

As Kobza finishes her final projects of her undergraduate career she holds onto memories, lifelong friendships and the top-notch education she has gained in CASNR.

“It’s disheartening to finish your classes and finals and that’s it,” she said. “It doesn’t really feel like you finished anything. You don’t get that affirmation of knowing that you graduated, and completed it because we don’t get a chance to walk at Pinnacle Bank Arena, shake Ronnie Green’s hand or receive a diploma. It doesn’t feel real honestly, it doesn’t feel like it’s ending.”

However, Kobza’s Husker grit, professional network and passion for beef production has prepared her for the next chapter of life.

Kobza will begin her graduate education this fall at West Texas A&M, and she hopes to get her doctorate and may return to the beef state. Ultimately, she would like to work as a consulting nutritionist for beef producers.

Along with expanding her own commercial cow-calf herd and her agricultural advocacy social presence, @ag.acknowledged, Kobza continues to set goals for herself.

“I’d like to start my own company and work for myself eventually, even though it might not be right away – on a consulting business around nutrition, herd management and overall production management,” said said.

Kobza will continue to provide advice for CASNR students as she moves onto the next chapter of her education.

“Go out and do the things, even if you want to or not – you might end up liking something it’s just getting figured out what you do like in terms of career or social aspects. Put yourself out there and make the connections,” Kobza said.