JANUARY 13, 2021 (SCOTTSBLUFF, NEB.)  — A Nebraska State Trooper was injured Wednesday when his patrol vehicle was involved in a chain-reaction crash on Interstate 80 near Chappell.

At approximately 8:30 a.m. MT, Wednesday, a trooper responded to a crash near mile marker 90 on I-80. A truck-tractor/semi-trailer had struck an I-80 overpass. An NDOT crew also responded to the crash to check on the bridge and assist with clean-up of the crash. The driver of the semi was transported to the hospital in Julesburg, Colorado with minor injuries.

At approximately 10:55 a.m. MT, while response continued for the first crash, a pickup pulling a trailer lost control, striking one of the NDOT vehicles, which was parked on the shoulder. That collision caused a chain-reaction of multiple NDOT vehicles, eventually striking the trooper’s patrol vehicle, a Ford F-250.

The trooper was inside the vehicle at the time of the collision. The trooper sustained what are believed to be minor injuries, but was transported to the hospital in Julesburg for medical clearance. The trooper has since been released from the hospital.

None of the NDOT vehicles were occupied at the time of the crash and no NDOT personnel were injured. There were no other injuries involved in the second crash.

The Deuel County Sheriff’s Office is conducting the crash investigation. Eastbound Interstate 80 was closed in the area for approximately two hours. 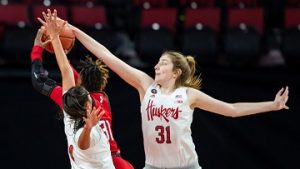